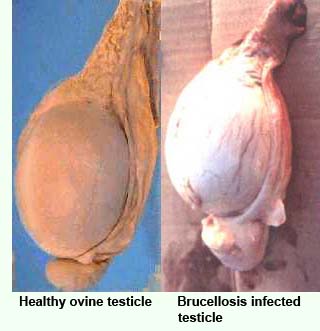 Brucella Ovis is an infection of the genital tract that may cause lesions which affects the quality of the semen and the fertility of the effected ram. The organism can enter the body through any mucous membrane.

Transmission is caused by rams riding each other or rams serving infected ewes.

Once infected, a detectable antibody response usually develops in 2 to 6 weeks (14 to 42 days) and the organism can usually be isolated from the semen after about 3 weeks.

However, the incubation period for the disease can be up to 60 days, but in most cases it is less than 30.

Not all rams are shedders of the infection. It is thought that only 40% of rams with a low titre reaction (i.e. early stages of infection or minimum immune response to the infection) shed. Of high titre reactor rams, 100% are thought to shed.

Since the ewe has not a significant role in the transmission of B. ovis outside of the mating season, the focus is on the detection in the ram.

Brucella ovis can be eradicated by a test and cull procedure. Infected rams are detected by scrotal palpations and serum testing.

Usually, several tests are needed to make sure that infected animals are detected. Also the infection can spread rapidly between rams making repeat tests necessary.

Best results in eradication of the disease is outside the mating season when sexual activity is low. If the infection is very high, total replacement of the ram is the best course of action. With a lower infection rate the ram flock is divided into two mobs, infected and non infected. Strict separation at all times is essential. The infected mob is eliminated and new B. ovis free animals are brought in and kept separate. The non-infected mob is tested and monitored until all are free of disease. Both flocks need to be monitored and a high level of management is required before a B. ovis free status can be obtained and the two ram flocks can be joined.

Attempt to grow B. ovis from a semen sample in laboratory.
Microscopic examination of the semen for pus & white blood cells.
* Multiple semen samples from each animal are recommended due to the variable nature of shedding.

It is thought that approximately 3% of NZ rams have B. ovis infection.

5% of Stud flocks & 11 % of Commercial flocks are thought to be infected.

- Brucellosis is seen as a regional issue with cases rarely seen in the South Island and variable incidence throughout the North Island.