Selection for Facial Eczema and Other Mycotoxins

In 1981 the Waikato was hit by severe Facial Eczema (FE), and since Waipa County always had a reputation as a hot FE area, Romani did not escape the consequences. Spore count rose to 1 million spores and the majority of the ewes were severely affected. Out of the 660 recorded ewes on the farm, almost 400 died or had to be slaughtered. The 2th ewes and ram hoggets escaped the worst because they were put on the limited area that could be sprayed with a fungicide.

In May of that year the ewe hoggets were graded on their clinical FE appearance and recorded against their sire. The figures were analyzed by Ruakura Agriculture Research Centre. One ram only had 11% of his offspring affected; the four other rams used that year had 75% of their offspring with clinical FE or worse.

That one good ram was intensively used the following years, and in 1984 when a ram testing program for FE became available I jumped at the chance to get involved. Twenty-five of the top recorded rams were dosed with sporidesmin, the toxic substance produced when spores of the FE causing fungi are eaten.

That first dose rate was 0.1 mg sporidesmin per kg bodyweight. Two rams survived that first test and were used. As it happens, those two were the mongrel looking rams and I hated to use them, but since you cant breed from dead sheep, there was little choice.

The dose rate was gradually increased every year. Slowly more rams survived the testing (showed no increase in GGT levels that are used to monitor liver damage) and since only five to six rams are needed to service the flock, the number of rams tested could be reduced to 15. In the past 19 years I have increased the dose rate by a factor of six and get a lot more rams that pass the test.

In 1998 which was another bad year for FE with spore numbers rising to 850.000, the Romani flock survived remarkably well. All ewe and ram hoggets were tested for GGT levels (by taking blood samples) and only 12% of the ram hoggets and 18% of the ewe hoggets had raised GGT levels. There were very few animals with clinical signs. Whilst 1981 was a disaster, 1998 was merely a nuisance. Breeding for FE tolerance had definitely paid off.

Currently my dose rate is 0.6 mg of sporidesmin per kg bodyweight and the pass rate is 83%.

Last year my vet made a mistake due to changes in protocol and gave the first seven rams double the dose rate. Notwithstanding the sombre forecast from Ruakura, all the rams survived and only two had raised GGT levels. But whilst a worst case scenario has been overcome the side benefits have been even more spectacular. 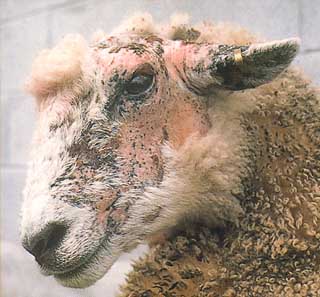 Statistically there is only bad clinical FE season once in 7 to 10 years. But every late summer when conditions are right, phythomyces charterum, the FE causing fungus, grows in almost all the paddocks of the North Island and the north of the South Island. Even in low numbers, the spores cause sub-clinical FE which is in some ways worse than clinical, simply because farmers dont see any external signs and so have no idea that the natural immunity has been suppressed because of the mycotoxins. The result is the production of their ewes can sometimes be severely curtailed.

The ewes without a properly functioning liver are prone to ill health, cannot put on weight, do not ovulate to their genetic potential, do not grow as much wool and cannot produce as much milk. So if you have more dry ewes than you can explain, a lambing percentage that remains static, ewes that run dry before weaning, hoggets that dont want to grow when there is plenty of feed about, etc you get the picture..., it is possible that sub-clinical facial eczema could be the root of your problems.

By increasing FE tolerance in your flock you naturally limit the effects of FE. And it gets better still: the tolerance for FE also gets you tolerance for a host of other bad fungi that produce toxins that can inhibit production.

The family of mycotoxins is large, and the bad news is that they all live or seem to prefer to live on ryegrass. Amongst them is the fusarium group, which includes zearalenone, trichothecenes and others. The spores of these fungi, once eaten, are transformed in the digestive system into a toxin or toxins.

The long and the short of it is that these mycotoxins significantly reduce production, and you may not be aware of it.

The surprising side effect of breeding for tolerance of only one mycotoxin is that the increased resistance gives suppression to all of them. The good news I can give to you is that if you start using FE tolerant rams many other effects of mycotoxins will also be lower. Ryegrass staggers, fusarium, zearalenone all diminish along with the worst aspects of FE.

To top it off, because of the superior immune system in the sheep, viral pneumonia, the effects of internal parasites and other diseases will be less severe, and total production will rise sharply.

Why not everybody is buying FE tolerant rams is totally beyond me.

Ramguard at Ruakura can give you the names of the ram breeders in your region who do sporidesmin testing but you will have to find out if they take it seriously. Only the ones that have an increasing annual dose rate (up to a point) and have been at it for some time are worth considering.

So if you think that you have a problem with sub-clinical facial eczema, and I can assure you that it is more than likely that you do, there are several things to consider.

Because of the dose rate of the FE tolerance ram breeders that have been at it for some time is fairly high, you the ram buyer benefit since it wont take long to build up FE tolerance in your own flock. Facial Eczema is highly inheritable at 42%, so ~1/5 of the lambs from that ram will inherit half of his tolerance. In three to four generations you will have a flock with useful tolerance and the benefit of a substantial lift in production.

The irony is that FE tested rams wont cost you any more than an untested ram, in fact they can even be cheaper. Remember also that breeders are concerned with more than the looks of their sheep. They have to be recording on SIL and trust the results, and subsequently cull a substantial percentage of the ram lambs weaned.

Dont expect to get access to the top sheep straight away, there are never enough to go around. If a ram breeder has a good culling percentage their average rams will be pretty good anyway and in due time they will offer you some top rams if you want them.

If you contemplate changing to an FE tolerance breeder give him/her a chance, ring early about what you want. Also stick with that breeder for a few years so that you can see the changes in production.


Remember, it wont happen overnight, but it will happen!