Based on an article by Bruce Binnie, AgResearch, Ruakura

Ultrasound scanning can be a useful aid in assessing the breeding merit of animals within a flock for carcass composition. The estimation of eye muscle width, depth and fat in relation to the animal's live-weight can be used to predict the amount of lean meat and fat in the carcass.

Similar approximations apply to estimations of eye muscle area from the product of width and depth. Different breeds, for example, are known to have different cross-sectional shapes of the eye muscle. Thus, different results will apply to two different breeds, and presumably to different animals within a breed. More work is needed to fine-tune these relationships.

Comparing the records of animals that have been born and reared in the same flock is the most usual way to use scan records. When there are genetic links between different flocks (e.g. through the use of reference sires), comparisons can also be made between flocks provided a good across-flock sire referencing analysis is carried out. IF THERE ARE NO GENETIC LINKS BETWEEN FLOCKS, ANIMALS CANNOT BE VALIDLY COMPARED ACROSS FLOCKS. This is especially so at shows and sales where each flock is usually represented by only one or a small number of animals. The different rearing circumstances found in the various flocks makes comparisons of animals from different flocks quite invalid.

For a within-flock comparison of breeding value, the aim is to rank the animals for lean and fat, and to assess the relative breeding merit of animals. It is possible to have two scanners who get different absolute values for eye muscle width, depth and fat, but who still do an adequate job of ranking the animals for breeding merit. Consider the following simple example:

Scanning accuracy for breeding value assessments depends on many factors, including:

Most operators prefer scanning fat at the "C" site because they can do so on the same image as they do the eye muscle width and depth. In contrast, the operator has to capture a second image to get the "GR" site. So, if there is enough fat at the "C" site, it is the preferable option, both from an accuracy point of view, and also because the throughput of animals is faster.

There is no easy way to check the accuracy of a scanner who has been scanning at the "C" site. The carcasses have to be cut at the junction of the loin and rack, and an experienced technician then needs to measure the fat depth. Even then, the point is not whether the operator has measured the exact fat depth, but whether the operator has ranked the animals accurately. 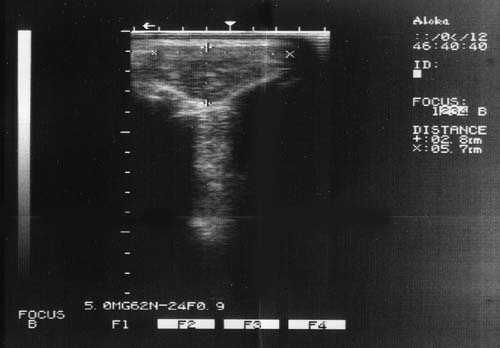 Output of ultrasound scan between 12th and 13th rib